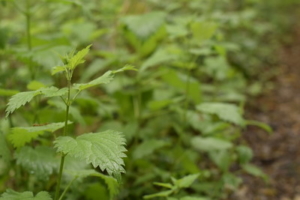 I’ve been trying my hand at some foraging recently, an attempt to de-domesticate myself somewhat and connect with the wild again. I might be stretching the use of the word wild given that I’m referring to pottering around my local parks.

Nettles are great place to start foraging as pretty much everyone can identify stinging nettles – you only need to touch them if you’re unsure – they’ll helpfully confirm if it’s them or not!

Although nettles are available all year round they’re best at the start of spring, so now’s the time to harvest and tuck in!

Why would you want to go foraging around your local park picking prickly nettles you might ask?

Firstly it’s 100% organic food. In fact, it’s better than organic, wild foods tend to have a much higher nutrient density than farmed foods which are often grown on depleted soils.

Nettles are rich in iron, potassium, manganese, calcium, and vitamins A and C. They also have around 3 times more protein content pound for pound than wheat and barley. Nettle powder is also one of the richest sources of crude fiber, it’s significantly higher than most cereals and other plant foods, more than 9 times higher as compared to wheat and barley flour.  Nettle powder is probably one of the richest sources of minerals among the plant foods.(1*)  That’s a pretty powerful punch for a ubiquitous ‘weed’.

Added to the fact that nettles are basically a super food, they’re also FREE! I spend a good chunk of money on the best quality food I can afford because it’s an investment in my health, so anything that can help on this front is welcome.

I got a bit bored of simply making nettle tea (as delicious as that is) so I took the nettle-show to the next level this week and made a full-on dinner out of nettles.

This soup is as quick and easy to make as it is delicious.

Move Your DNA
Scroll to top